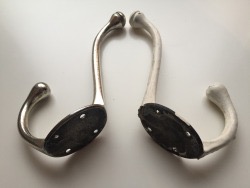 When we moved into our home, it still had lots of beautiful Edwardian details that had thankfully survived almost a century of change. There were obvious things like the stained glass door and tiled fireplace and then there were the small details, the things that lots of people wouldn’t even give a second glance. The little rosewood ‘men’ that cover the keyholes, the deep and intricate skirting boards, and even the tiny brass lock on the under-stairs cupboard. These are the things I love.

We inherited a wood-panelled downstairs toilet – nothing fancy but again a little room that had remained relatively untouched. On the walls were these beautiful, decorative hooks – the kind that you just don’t see any more. Heavy, quietly ornate but unfortunately covered in layer after layer of paint, we left them in peace initially. With lots of work to do in the house they were ‘something to come back to’.

And so, full of spring plans and projects, we decided to give this room some attention over the Easter weekend. It needed a lick of paint and a lot of decluttering so hubby used the occasion to reinstate one of his favourite gadgets (heat-gun) and finally, off came the hooks for some much needed TLC. There was scraping and scratching until the paint was finally off and dull brass was revealed. Time for my favourite product – the magpie girl’s best friend – Autosol metal polish! Purchased to clean the chrome on a motorbike, I’ve never known anything like it to bring shine back to metal. A few hours of elbow grease later, hubby had made quite a difference. The elegant hook was shining like a new penny and the detail on its tip was just perfect.

It never ceases to amaze how lovely little objects like these end up slathered in layers of magnolia paint, hidden from view, their quality and character lost. I know to many people they’re just hooks.  To most people probably. To us, they are worth the hours of scraping and polishing because they are beautiful, unique and another tiny part of the history of our home. They’ve carried a lot of coats over the years! Yes, we’re sometimes stupidly sentimental and that’s ok.

Who knows, the people who come after us might choose magnolia again (please no!) but at least we’ve given them some respite, no matter how brief.